The End Of Flip Video

Back in the day say 2009 there was a huge movement to go with an easy to use Flip video camera. So before that there was the hi 8 and digital 8. So the next natural move was to go full digital to hard drives.

So back in 2009 I finished 6th place in a My Lead System Pro contest and was given one of these pretty cool Flip Video UltraHD video cameras. After having used one of these compact digital video cameras I can totally see the draw to why they have sold like hot cakes. 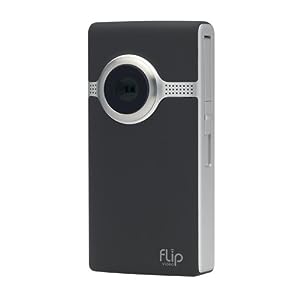 1) Being all digital you can save footage so much easier for storage.

2) Video and most audio quality was good enough for home videos on my imovie setup.

Now that was the good part.

The bad parts come in that there was pretty bad battery life, some models have limited storage (most flip videos have built in storage with no way of upgrading or expanding),  price that starts to get closer to the higher end models of ipod's and such, and no integration to social sites like facebook and myspace.

So exactly what happened? Why did Cisco Systems decide on April 12 to end Flip Video? In 2009 they spent 590 million to acquire the company so why cut ties so soon?

It basically boils down to the advancement of technology and some of what I mentioned before with the bad parts of the Flip video model.

1) iPhone, android phones, blackberry, and window's mobile have come out extremely hard in the last 24 months. These devices before where only known for audio and picture. Now, video capabilities are getting better and better with each new release. Once the iPhone started including in phone video editing the writing was on the wall, but that wasn't all!

The additions of video submission and social network attacked at one of the very thing that Flip Video couldn't do.

Flip Video doesn't have the ability to jump on a 3g, 4g, wifi signal so much. There were attempts but when your able to shoot a quick video and then upload on the spot that just pretty much put the end to any use of a separate unit, right? Well, not really but let's continue.

2) iPod touch, iPod nano and other small devices started to get into the video market and when those who were primarily interested in music started to get a pretty small and usable video machine the Flip Video started to lose even more market share.

Flip Video Ends – But Not Really

Here is the thing about this situation and why I don't feel so bad.

Overall, the market looks bleak for those in standalone mobile video units but check this out and why I actually bought another one 😉

I bought a Kodak PlaySport 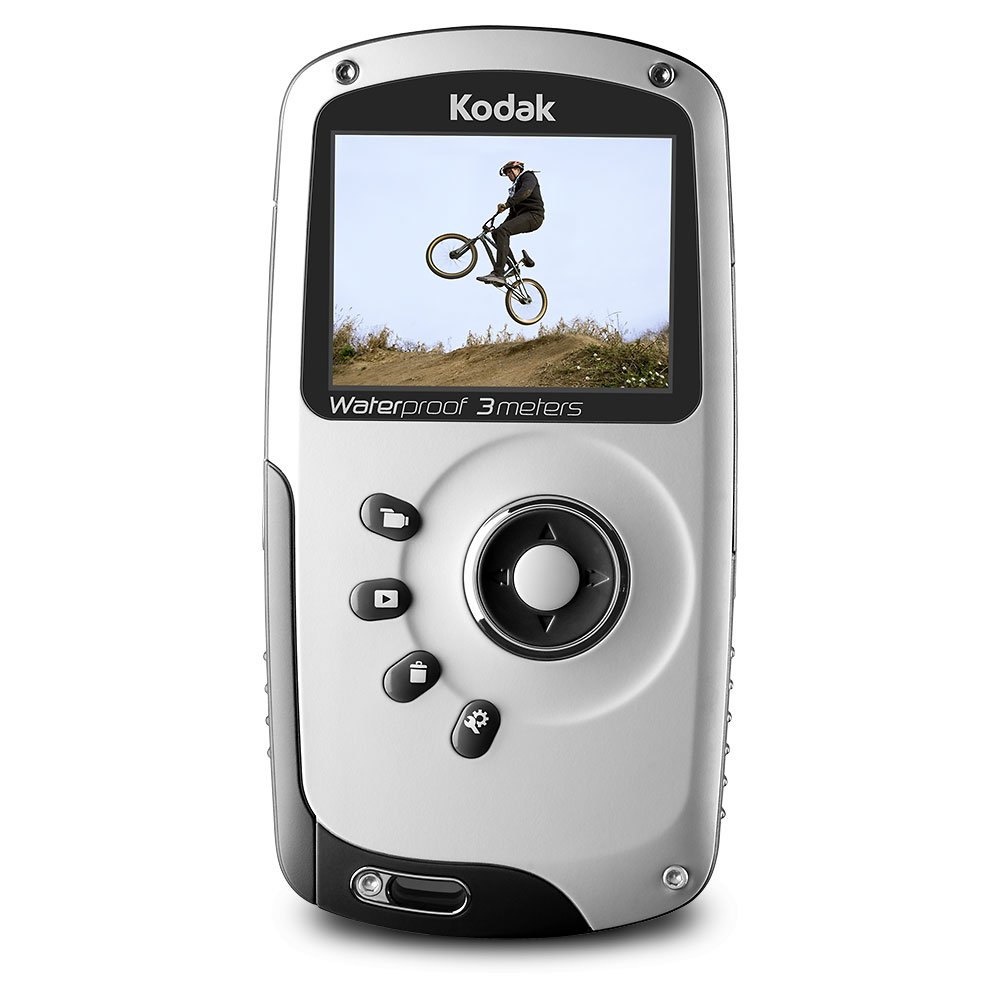 shown to the right ->

Here is a run down to why.

2) This Kodak PlaySport has image stabilization. So in terms of shooting while moving or shooting moving objects it will help but not totally fix all motion but it does help.

3) Shoots in HD of 720p and 1080p and I'm pretty sure there are very few smart phones or music devices that can do that.

4) Storage capacity. If you already have a ton of video games and mp3 on your phone and mp3 player what are the chances you still have 16GB left for straight up video? probably not. Most phones these days have a phone cover or guard. It is just not acceptable to having to pop out your battery (I can't access my micro SD card without taking my battery out in my Nexus One phone). Most smart phones or built in devices can be expandable if your lucky. My phone can take a 32 gb micro sd card I believe not until recently in 2011 did the prices start to drop.The Koday playsport can easily swap out batteries without having a huge boot up time.

5) Battery life. Look. Both my smart phone and even flip video and Kodak playsports will not have crazy amount of battery life. But the battery compartment is super easy to get to and so I have 2 spares I use that gives me about 4-6 hours of record time when I'm out and about. This is mainly needed on vacation and with 2 x 16gb SD cards with 3 batteries I can do a whole lot of shooting when I'm out. This is just not going to happen with my phone.

6) Hardware improvements still needed. I've already mentioned that Image Stabilization is needed in my smart phones and that the Kodak Playsport has but how about a better mic, better color decoding, better zoom, better low light capabilities, and just better video player all around?

Sure in the future technology will eventually put a Flip Video right into a smart phone but getting the lens and all other features mentioned above will be a hard task with so much OTHER stuff in smart phones as it is.

7) Waterproof. This Kodak PlaySport is waterproof to 10 feet. Yep. Can your ipod touch or smart phone do that without some crazy expensive water proof case? I don't think so. This unit right out of the box can be at a water park or just out and about in daily life. Shooting in the rain? fine. Shooting tropical fish in Hawaii? or course! 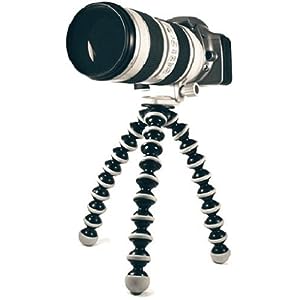 I snorkel a lot and there is NO way I'm going to risk taking my smart phone out into the ocean just so I can lose it to some fish. The rope that comes out of the Kodak PlaySport is super handy when your snorkeling and not having to grip your video device to death.

8) Video accessories. As stated before the wrist strap (or rope) is a needed accessory when swimming. Flip Video also has lens attachments for other cool shots and how about the ability to use a tripod? I use this Joby Gorillapod shown on the right ->

I have this for my heavy Digital SLR camera with zoom lens and also use it for my Kodak Playsport. It was also handy when I had my Flip Video. Everyone knows if you want a correctly shot video without the “shakies” you MUST use a tripod. Sure you can use a standard tripod but I'm not a big fan of lugging around a 3 ft tripod that weighs 10 lbs.  I would rather run with a portable one that can bend and attach to whatever. So phones and music devices will NEVER out of the box have the ability to link up to a tripod cause that's just not the market for them. Maybe in the future but I just don't see it ever happening with the need to keep phones small and compact.

So even with the news of Flip Video ending it's production I would still HIGHLY RECOMMEND the Koday Playsort. Many people even today don't have the fancy mp3 player or the newer smart phones that can product acceptable video. In those cases it is a NO BRAINER to go ahead and get a mobile video camera.

This just goes to show there is no sure thing in technology. You are here one day and could be closed and shut down the next without any real warning. Cisco Systems pulled the plug and had to with their poor earnings for the quarter but as a consumer we need to watch trends like this. Even more so for those of us who run our own businesses. Many of my students use a mobile video camera for their business shooting personalized training and doing product reviews. Something like these devices have a strong demand and should not be kicked to the curb.

But, life must go on and adapting to the ever changing climate of consumer demand and technology advancement is needed. Business must go on and those who will stick around will find new ways to earn money from their businesses. Be prepared to move fast with technology and if your in a home business be prepared to move with everyone else. The mobile video market is not dead but we will need to forever say goodbye to Flip Video, we heart you 😉 You know i was planning to get a flip next week… thanks for sharing bro
I think i’m gonna get the kodak instead….

the only real thing the flip had on top of the kodak was a little bit wider focal lense. but right now just find a price you can deal with. technology will advance rapidly and maybe in 3-5 years the market will change yet again. These are pretty cheap devices that work awesome so either purchase should be good.

Thanks and very informative, Lawrence. I have looking into buying the Flip Video but now that you have given the other side I’ll be looking into the Kodak Playsport. As Mother Teresa said “Let no one ever come to you without leaving better and happier.” To Your Success….Amos

flip video was a great little gadget but best to use currently supported products. but… the flip video could be on killer sales 😉 so @e1c502537999016d794aa1c53e1867b0:disqus just use something as both are still good.

Great post, Lawrence. Thanks for the heads up on the end of the Flip Video.
Technology is ever changing just like Internet marketing. Glad your eyes are open
for us. We will stay tuned.